But wasn't America founded as a Christian nation? 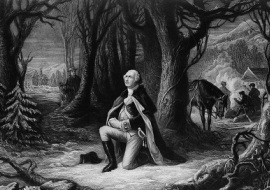 One of the main arguments that  accommodationists make is that America is a “Christian Nation”and was founded as such, so it makes sense to include Christianity as part of public life, including schools. As Peter Irons points out in God on Trial, both sides of the debate over whether this is true quote the same historical record to reach their opposite conclusions:

[I]n asserting that early America was a Christian Nation, [conservatives in the culture wars] gloss over the fact
that many Americans, especially Native Americans and African Americans, were non-Christians, and they fail
to recognize the deep-seated differences among Christians, so deep that in some instances one sect questioned
whether another was Christian at all .... [Meanwhile, the] liberals in the culture war forget that many of the
champions of religious liberty during the late eighteenth century were fighting for the right to express their beliefs
publicly. (Lambert, p. 5.)

The important thing is not whether one side is "right" and one is "wrong" about that particular issue, but rather how we move forward as a nation in which religious freedom is one of our most cherished and fundamental rights. What both sides need is to find common ground.

While those on both sides of the argument can certainly point to quotes by the Founding Fathers that support their arguments, the fact is that the most prominent among them were staunch supporters of religious freedom. These Founders believed that religion was a natural right that should not be interfered with by government, and many felt that religion was important for teaching important moral principles that would assist in keeping the peace. However, it is important to keep in mind that they were also rationalists who designed a government based on reason. The religious wars in Europe, as well as citizens being required to follow the beliefs of their leaders, were things they wanted to avoid in our new nation. They also understood that America was already a much more pluralistic society than the countries where they and their ancestors had emigrated from, and that toleration and acceptance of others' beliefs would be necessary to maintain tranquility.

Even before the First Amendment, George Washington made it clear in letters to various religious groups that religious was freedom essential to our new nation. He emphasized that freedom of belief was a natural right, and that the responsibility to be a good citizen came along with that right. One example is his Letter to the Hebrew Congregation of Newport, Rhode Island, in which he used the famous phrase, “To Bigotry No Sanction, to Persecution No Assistance.”

It was Thomas Jefferson who used the phrase  “wall of separation between church and state” in his reply to the congratulatory letter he received from the Danbury Baptist Association after his election. The Baptists, who were a minor religion in America at the time, were thrilled that Jefferson had been elected, since he had written the Virginia Statute on Religious Freedom and believed so strongly in the separation and freedom of conscience.

James Madison,“Father of the Constitution,” authored the Memorial and Remonstrance Against Religious Assessments opposing a bill requiring the state of Viriginia to support religious teachers, as well as many letters and notes regarding religious freedom. At the Virginia ratifying convention in 1788, he said, "There is not a shadow of right in the general government to intermeddle with religion." 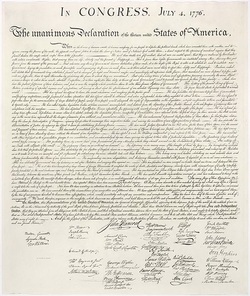 The Declaration of Independence is often cited as proof of religious intentions by the Founders and/or the religious beliefs of Jefferson, Adams and Franklin, who were all on the committee that created the document. But the mention of a “Creator” and “Nature’s God” were meant to put forth the idea that men are born with rights, not granted those
rights by governments.

When the Constitutional Convention was held in the summer of 1787, there was obviously some discussion about the inclusion of God in the document. The Constitution, however, makes no mention of God or Christianity, and
originally only referenced religion to forbid religious tests for office.

This omission did not happen by accident, nor did it go unnoticed by the populace. Many leaders were against
ratification of the Constitution just on the grounds that God had been omitted, and some states mentioned it in
their ratification conventions.

There have been numerous attempts to either add to or change the Constitution, especially the Preamble, to include God and/or Jesus Christ. All of these endeavors have failed, although it has given these groups leverage in forcing secularists to make other, less drastic accommodations, such as adding "In God We Trust" to currency.

With the ratification of the Bill of Rights in 1791, another reference to religion was added as part of the First Amendment, which begins: “Congress shall make no law  respecting an establishment of religion, or prohibiting the free exercise thereof…”  The first part is known as the Establishment Clause, and is the basis for the separation of church and state. The second part is known as the Free Exercise Clause and prohibits the government from infringing on the peoples’ right to believe in and practice their  religion (except in very specific circumstances where laws would be broken or the rights of others infringed).

Perhaps the most prominent evidence of America’s foundation as a secular nation is the wording of one of the first treaties between our fledgling nation and another  country, the Treaty with Tripoli. Written in 1796 under President Washington, approved unanimously by the Senate, and signed by President John Adams just after taking office in 1797, the Treaty was meant to put a stop to the attacks on American ships by the Barbary Coast Pirates. The Treaty specifically states:

"As the Government of the United States of America is not, in a any sense, founded on the Christian religion; as it has in itself no  character of enmity against the laws, religion, or tranquility, of Musselmen [Muslims]; and as the said States never have entered into any war or act of hostility against any Mehomitan  [Muslim] nation, it is declared by the parties that no pretext arising from religious opinions shall ever produce an interruption of the harmony  existing between the two countries."

The treaty was read publicly by President Adams and published in newspapers across the nation without negative reaction.

Church & State. https://www.au.org/church-state. Americans United for the Separation of Church and State.

“James Madison” at at God and Country:  Religious Views of the Founding Fathers, Presidents, and
Vice-Presidents  [online] available at http://www.geocities.com/peterroberts.geo/Relig-Politics/JMadison.html

Lambert, Frank. The Founding Fathers and the Place of Religion in America, Princeton: Princeton University Press, 2003.

Religion and the Founding of the American Republic. http://www.loc.gov/exhibits/religion/. Library of Congress.
All images courtesy of Wikimedia Commons.

DISCLAIMER: The information on this website is based on research and
training, and is meant as a general guide. It should in no way be construed as
legal advice.